“If I had never done the Peace Corps, I probably would have never had any interest whatsoever in the Pro Bono Program at USC Law,” says Andrew Chandler. “But I was drawn to it when I first walked through the doors.” 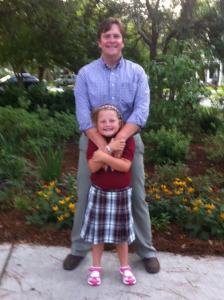 “I’m very happy that I found the Pro Bono Program or, rather, that it found me.”

While Chandler was growing up in Savannah, Ga., his parents stressed to him and his four siblings the importance of helping others. His father and brother were Marines and his mother was a nurse, but Chandler saw a different way to answer the call to serve. After majoring in public administration and political science at Winthrop, he enlisted in the Peace Corps. A two-and-a-half-year stint working in the Dominican Republic teaching soil conservation and agriculture changed Chandler ‘s life. “I know that it seems like it has nothing to do with pro bono, but in a way, it has everything to do with it,” he says.Because he was a little bit older than the other students, Chandler says he had a different perspective on law school, and he wanted to do something helpful and useful during his time there, rather than just studying and going out with friends. Realizing that the Pro Bono Program sounded like something he might enjoy, Chandler met with its director, Pam Robinson, to find out more and signed on almost immediately. “I’m very happy that I found the Pro Bono Program or, rather, that it found me.”

The bilingual ability Chandler picked up in the Dominican Republic proved useful as he volunteered and worked with a handful of Pro Bono Program projects that needed the assistance of a fluent Spanish speaker. One of those projects — Volunteers in Tax Assistance (VITA), which helps low income residents with their taxes — spurred his interest in tax law.

Today, as a tax attorney and estate planner with Evans, Carter, Kunes & Bennett, P.A., in Charleston, S.C., Chandler enjoys helping families deal with financial issues, whether it’s working on their wills, planning for retirement, or protecting their assets. He is able to combine his background in tax law and his passion for pro bono work to help recipients of homes through East Cooper Habitat for Humanity set up wills and durable powers of attorney.

“Every day in my practice I work with people who have high net worth. But the people I help through my pro bono work have never had an asset before, and suddenly they have a house. So I teach them about wills and go over everything else they’ll need, the same as I do for my wealthy clients.”

“It’s an example of how you can take any aspect of law and do it in a pro bono way. If I can take what I learned in law school and use it for the greater good, then any lawyer can,” Chandler says. “There are a million ways to help, and if all the lawyers in South Carolina just did a little bit, imagine what kind of state we’d have.”